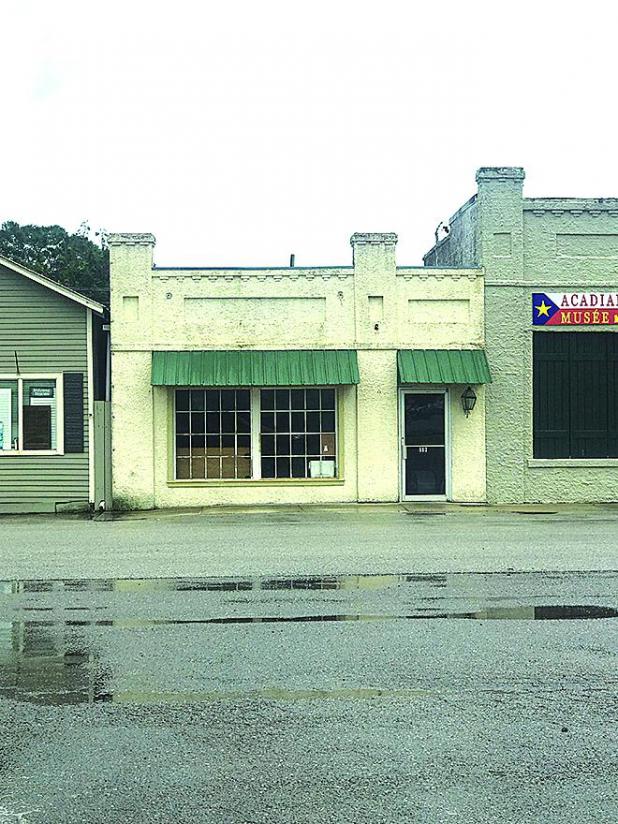 The home of Cafe’ Erath, along with many other historic businesses.

Historic building to offer a taste of the past

The town of Erath will be seeing a welcome addition to the downtown area later this year! Amy and Taylor Mencacci, (Erath’s current Mayor and his wife) and Tammy and Jason Connor, (one of Erath’s current Alderman / Mayor Pro Tem and his wife) along with family support will be opening a coffee and doughnut shop. What started as an idea between friends has finally become a reality.
The Café has held some great memories along with a long line of Erath owners to say the least. Around 1911 Mr. Olter DuBois started a grocery/meat market and ran the business until the mid 1950’s. At that time, his son Joseph Semar, (Jay) DuBois took over the business until the 1970’s. After Jay’s time running the store, many people had a hand in different businesses in the café. Lud Sonnier, George Dupuis, (ex Erath Mayor) are just a few names associated with the café establishment.
In the 1980’s the building became know as the “Turf”. Jason Connor recalls hearing that there were many many serious card games and multiple tables playing at the same time, “sometimes around the clock,” Connor remembered. In the early 2000’s Weldon Granger purchased the building and promoted famous local legends along with Warren Perrin. Weldon’s father Willis Granger who is 97 years old and still kicking was also one of the living legends honored.
Today, the building is in the final phase of a total makeover and the interior has been totally remolded. “We will have coffee, espresso, latte and cappuccino in our coffee line,” Connor said, “Internet will also be provided for those who want to relax while having coffee.” Connor and Mencacci both agreed that their biggest goal and focus was to have a local place for kids and adults to gather in the mornings or afternoons, evenings and on weekends. “They’ll have a safe place to be locally and parents will know that their children are safe here for studying or even hanging out,” Mencacci said.
Virtual classes will also be easier under the unfortunate circumstances with COVID-19. Children will be able to use the Wifi if they need it.
“We will also offer sandwiches for those who want a quick bite. One of the items Taylor and I are most proud of is our doughnut line, and I think everyone else will be too,” Connor said.
Thinking back to the exceptional doughnuts at Vincent’s Donut King, there is really no comparison to the taste, something that people have missed for many years. Vincent’s doughnuts shut its’ doors 40 years ago after the passing of Floyd Wade, who held the recipe that no one could find; until recently.
“We will be offering the ‘Original Vincent’s Doughnuts’” Connor excitedly mentioned. Tammy Vincent Trahan, the daughter of Floyd Louis Vincent, (Original Owner of Vincent’s Donut King) will be an intricate part of the cafe’s doughnut line, as she will be producing the doughnuts.
Her 38 years of experience and expertise is unquestioned in the doughnut world. Many people still talk about the light flavorful doughnuts that no one can recreate. Having the Vincent’s doughnuts back in Erath will bring back the memories we once had when Floyd Wade Vincent, Tammy’s brother had a drive through doughnut business for 17 years next to Moo Noo’s.
“When I called Tammy, who was a classmate of mine, to see if she would be interested in sharing the recipe, I wasn’t ready for her reply to be better than I expected,” Connor said, “She said to me that not only does she have the recipe, she’ll cook them for us.” It is no question how exciting this was for the new business partners.
A final addition to the café will be the availability of renting out the building after hours for small parties, showers, birthday parties or any other special gatherings. “Taylor and I are very excited to be a part of helping our downtown to continue moving forward. We want the café to provide an atmosphere where you can relax with your family and friends, or just some alone time with your cup of coffee,” Connor said. Both family’s including the Mencacci’s and the Connors will be a part of the day to day business because they want to be a part of Erath’s great community and visit with everyone on a personal level. We are looking forward to seeing all of you in the very near future!
The name of the business? Cafe’ Erath. Cafe’ Erath will not only offer doughnuts, coffee and sandwiches, but also the comfort of a home away from home. The walls of this historic building is the home of many conversations, traditions, laughs and memories and the duo is happy to keep that very dream of continuing the legacy in the town of Erath.
“Bringing back that community spirit means a lot to us and before you know it, the doors to Cafe’ Erath will be open for business.” They plan to open the cafe within the next two months.
Taylor Mencacci and Jason Connor, with the help of their spouses, families and their love for doughnuts, coffee and smiles, are eager to carry on a long legacy to look back on in the years to come. Cafe’ Erath is proud to have such a historic location. “We want to welcome you to our home and our dream to give our community, residents and visitors an experience to remember.”