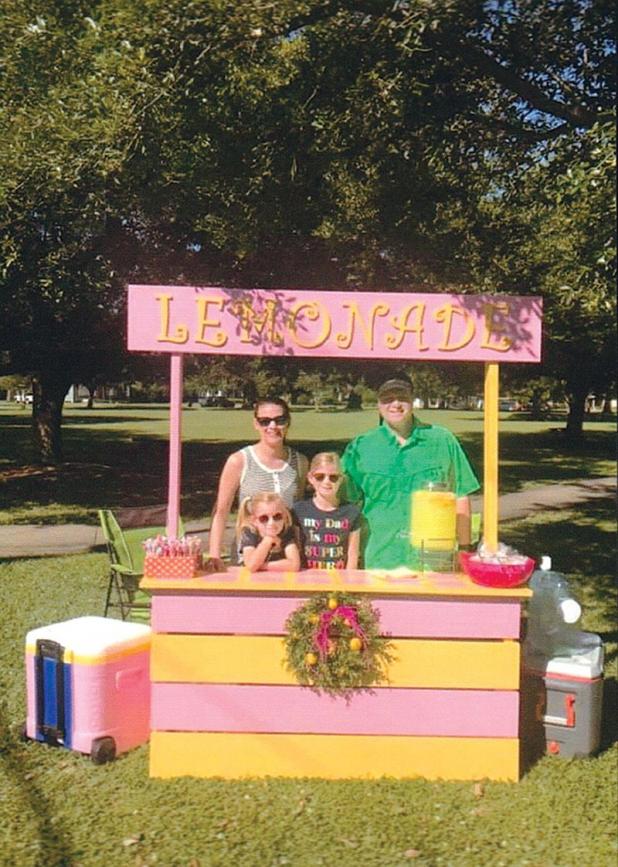 The Broussard family stands proud of their work during the lemonade stand benefit and graciously hands over a donation check to MD Anderson Cancer Center. 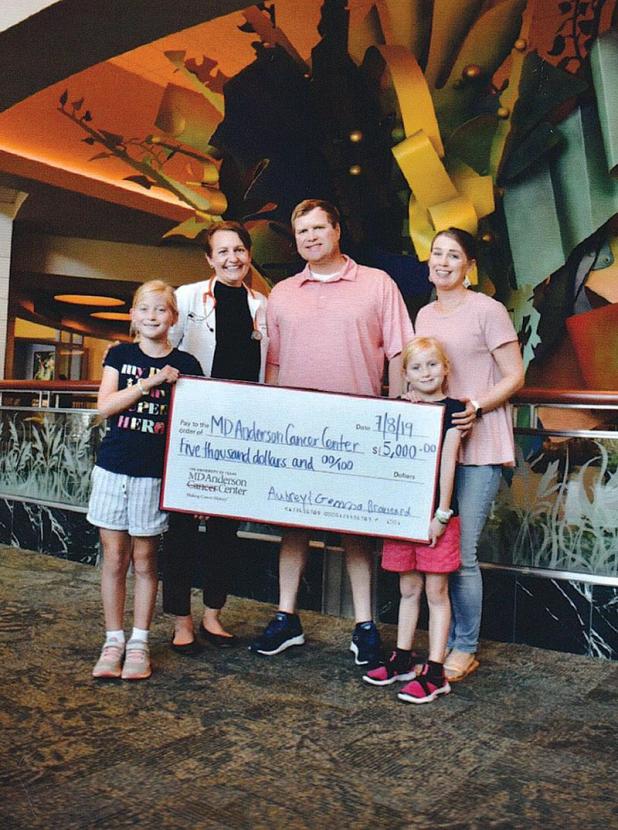 Broussard sisters come together for a cause after father’s diagnosis

Nine year old Aubrey Broussard and seven year old Gemma Broussard are two inspiring girls who wanted to help others. When their dad, Chip, was diagnosed with Melanoma two years ago, his daughters and wife Leslie were initially saddened by the news, as was he. The couple took on a lot in a short period of time, but managed to balance home life as well as hospital visits and treatments.
Aubrey and Gemma wanted to do more than just support their dad. They wanted to make a difference. The pair decided to come up with a plan, which included lemons, pitchers, sugar and of course, Sonic ice. “It was both of our idea to do the lemonade stand,” the girls said in unison.
“They’ve always wanted to do a lemonade stand and Chip and I always assured them that one day, it’ll happen,” Leslie said, “It was always put on the back burner.” Suddenly, one day, Aubrey asked again to do a lemonade stand; which at that point, their dad was already diagnosed with cancer. Leslie asked, “What will you do with the money?” A question that she nor Chip had prepared themselves for after hearing their daughters reply, “I want to donate my portion to MD Anderson, mom,” Aubrey said.
“It was pretty touching knowing that Chip and I didn’t prompt her to do that,” she said, “It makes you realize that you ‘are’ doing a good job as a parent as well as attest to the kind of heart she has.”
Gemma agreed with her sisters cause, but insisted that in the future, they do another lemonade stand for a separate cause; to help the poor. “You know, I had to go with MD Anderson too because it meant a lot to me too,” Gemma said, “It’s because our dad goes there because he has cancer.”
Leslie says that her husband Chip had been going to MD Anderson for two years now and that once he was diagnosed with malignant Melanoma,.Treatment began soon after diagnosis, which was a clinical trial. “He had his last treatment in July, but he is not in remission at this time since there isn’t a whole lot out there for his type of cancer, but we’ve had great results since,” she said.
Aubrey and Gemma say that they are super proud of their dad and agreed that when they found out about their dad, they were sad. “We are getting happier since we feel like he will be okay,” Aubrey said.
The family put their heads together to put the lemonade stand idea in place. Aubrey chose the sweet yellow and Gemma chose the rose color, therefore, the colors of the stand were out of the way. Chip measured, cut, and pieced together the lemonade stand.
The family set up the lemonade stand a total of four times and the amount that was raised far exceeded any of their expectations. “We sold each cup of lemonade for .50 and had baked sweets and chips to sell as well,” the girls said “But we gave away suckers to thank them for buying what we had and to give back.”
The family gathered for Chip’s last treatment appointment and presented MD Anderson’s Melanoma department with a $5,000 check. “Our community has really been so great in all of this. The donations we received for our cause was beautiful and overwhelming and we cannot thank everyone enough,” Leslie said. “We had donations from Fed Ex, the mailman, almost everybody,” Gemma said.
The girls gave advice to anyone wanting to do a fund raiser or a lemonade stand, “If we had to give any advice with selling lemonade or anything else, not to make it so pricey so that people would be able to buy it,” Aubrey said, “And don’t do too much of bright colors because they could shine the colors and can burn in the sun,” Gemma said.
The Broussard family thanks everyone who aided them in any and every way. Chip’s doctor is said to be the best doctor they’ve had the chance to meet in their journey. “Aubrey and Gemma are handling everything so well, they are so strong and we grow prouder of them every day,” Leslie said, “We have so much to be thankful for.”