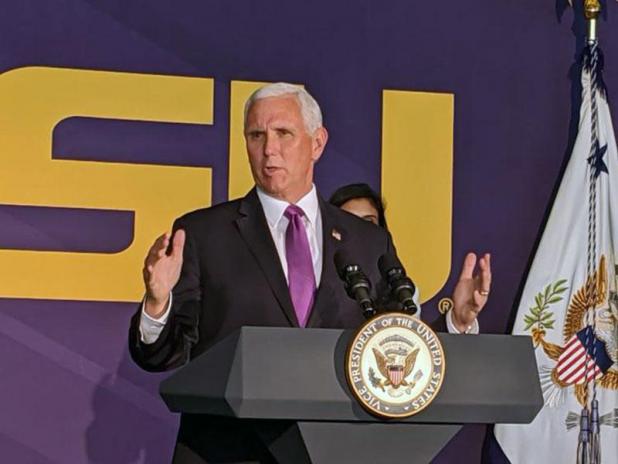 Vice President Mike Pence speaks to members of the media at LSU on July 14, 2020.
By David Jacobs | The Center Square

BATON ROUGE – Louisiana is better positioned to safely hold in-person classes in the midst of the COVID-19 pandemic now than it was in March or April, Vice President Mike Pence said Tuesday.
Though coronavirus infections again are rising statewide, not reopening schools is too risky for students to be considered, federal officials said.
“The people of Louisiana know how to slow the spread. They know how to flatten the curve,” Pence said. “We’re with you, and we’re going to be with you every step of the way.”
Pence and other federal officials met with Gov. John Bel Edwards, members of Louisiana’s congressional delegation, state higher education leaders, and LSU head football coach Ed Orgeron at LSU's campus in Baton Rouge. They discussed plans to reopen campuses and possibly hold a college football season in the fall.
Louisiana was one of the nation’s leaders in COVID-19 cases and hospitalizations in March. After closing schools and some businesses, requiring other businesses and churches to limit the number of people allowed indoors, and urging residents to wear masks and maintain distance from people who are not part of their household, the state saw the infection curve flatten in May and June.
But after loosening restrictions, the virus surged, prompting Edwards to issue a statewide mask mandate, close bars again, and keep the state in “phase two” of the federal government's road map for loosening restrictions. Pence, who heads the White House’s coronavirus task force, said he agreed with Edwards’ decision to stay in phase two and supported the mask mandate, adding that such a mandate might not be necessary everywhere.
“We’re going to open up our schools, Lord willing, and we’re going to do that in about a month,” Edwards said.
Edwards said following Centers for Disease Control and Prevention recommendations and “universal mask usage” will be critically important. Pence said the CDC plans to issue more guidance for schools later in the week but stressed CDC guidelines should not be used as justification not to reopen. The vice president did not answer a question about whether the Trump administration would seek to punish schools or school districts that choose not to reopen.
“It’s not a matter of if [schools should reopen],” Secretary of Education Betsy DeVos said. “It’s a matter of how.”
In discussing the need to reopen K-12 schools during Wednesday’s news conference, officials talked about how children have a relatively low risk of serious complications from the disease, though some have died. There was little mention of the health and safety of teachers and other school employees, some of whom are in high-risk groups.
An extended absence from school may be especially harmful for children who already are behind academically or come from unstable households, some experts argue. The American Academy of Pediatricians is urging local governments to reopen schools this fall.
U.S. Sen. John Kennedy said not opening schools would do more harm than the coronavirus. He argued the United States should follow the lead of other countries that have reopened schools, though many of the countries he listed have been more successful in containing the pandemic. Kennedy also urged universities to “step up to the plate” and help to expand testing in the state.
Asked why he was so confident Louisiana and other Sun Belt states were in a better position to fight the disease now than in the spring, Pence pointed to greater availability of testing, personal protective equipment and medicines, along with the experience of health care professionals.
The federal government has partnered with the private sector to produce masks and gowns and soon will have produced more than 100,000 ventilators in 100 days, Pence said. He also pointed to new treatments such as remdesivir, which has shown promise in treating hospitalized COVID patients. The federal government has replenished the state’s supply of remdesivir, officials said, which Edwards said last week was running low.
Federal officials on Tuesday announced a new federal initiative for testing nursing home residents who account for more than 40 percent of COVID-19 deaths. Every nursing home nationwide will get equipment capable of doing 20 on-site tests per hour and get rapid results. Officials plan to start next week with 2,000 nursing homes considered high risk because of the spread in their communities, including 17 in Baton Rouge.
The new tests will allow nursing homes to quickly identify a resident or employee who is infected and isolate that patient, said Seema Verma, head of the federal Centers for Medicare and Medicaid services.
“This is also a significant step forward in reuniting patients with their families,” she said. “Once we know the facility is free of the coronavirus, it allows visitors to come back.”