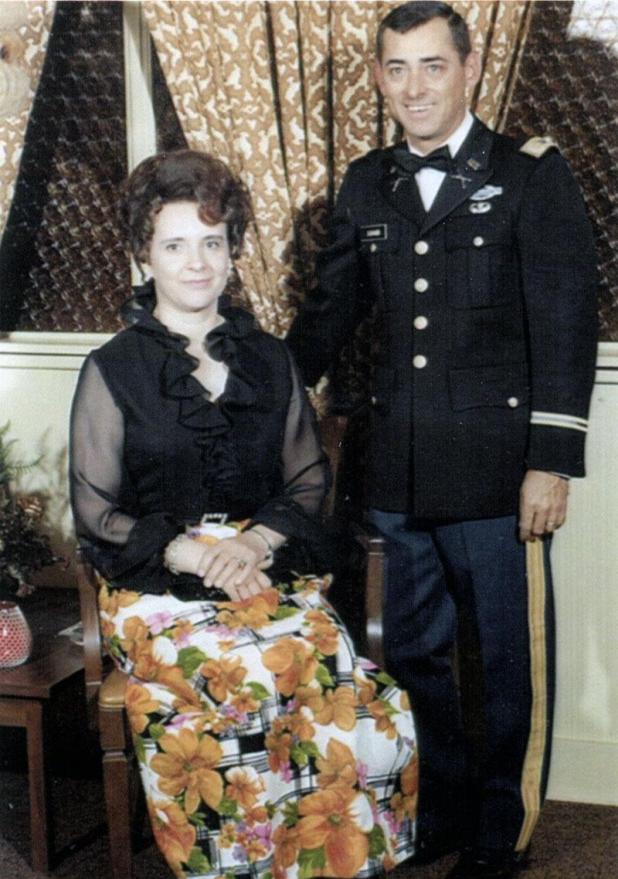 Major Robby J Sonnier, pictured with his late wife, Ann, will be
honored as Cattle Festival Veteran of the Year.

The 71st Annual Louisiana Cattle Festival is honoring Maj. Robby J. Sonnier as Veteran of the Year.
Sonnier served 21 years in the United States Army, from 1957 to ‘78.
The Cattle Festival will be held in Abbeville on Oct. 10-13.

Joined the U.S. Army as a Commissioned Officer in 1957
Went thru Basic Officer Training at Fort Benning, GA in 1958
Assigned to Fort Hood, TX in 1958 as instructor/platoon leader and was eventually named Executive Officer of the entire Company
Assigned to Fort Knox, KY 1959-1960 to attend Armor Maintenance Officer Course
Assigned to the Canal Zone 1960-1963 initially as Maintenance Officer for the Battle Group
*Reassigned as the Company Executive Officer'
*Promoted to Captain and in charge of the entire Company
*Promoted to Battalion Operations Officer
Assigned to Fort Benning, Ga., 1963-1964 for Advanced Officers Infantry Course and from
1964-1966 as instructor with the Mobility Department of the Infantry School
Assigned to Vietnam 1966-1967 as an advisor to the Vietnamese Army(MACV), advising on combat and battle tactics while involved in combat with North Vietnamese Army(NVA)and others
1967-1969 R.O.T.C. lnstructor Georgia State University, Atlanta, GA
1969-1970 Executive officer Joint Security area Pan Mun Jom, Korea- all peace talks handled between North and South Koreans since the Qease Fire in 1953
1970-1973 Fort Polk, LA served in various positions as Committee Chairman of various command committees
1973-1975 assigned to the base at Erlangen, Germany as Battalion Executive Officer and was named Deputy Base Commander
Received a hardship reassignment due to brother being gravely injured in a motorcycle accident in Cut Off, La was assigned as Battalion Advisor to the Louisiana National Guard based in Abbeville, LA
Retired from the U.S. Army October 1, 1978

While stationed at Fort Hood, Texas, Major Sonnier met and fell in love with his wife, Ann. They were married in 1959 and enjoyed almost 40 years together before she passed away in 1999. Major and Mrs. Sonnier had three sons, Rick, Bobby, and Ron.