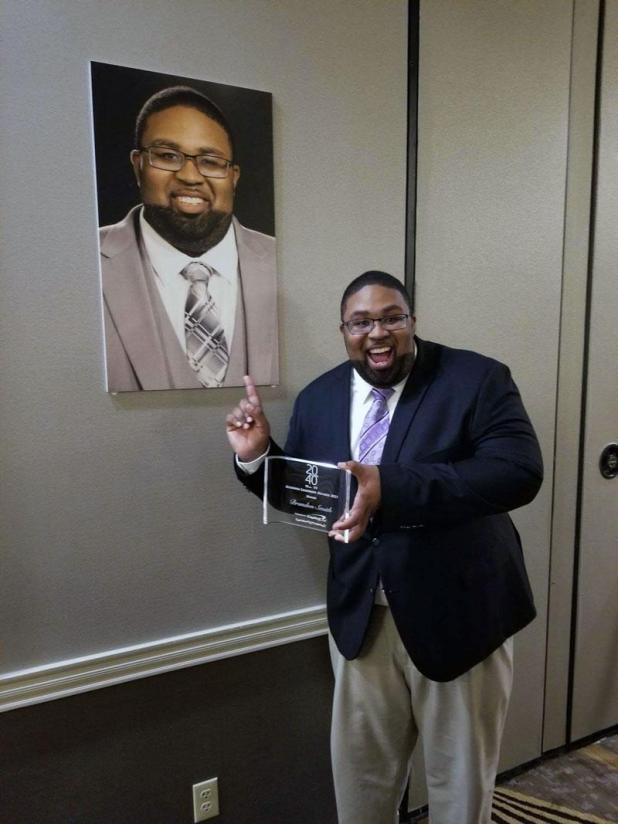 Brandon Smith was all smiles after being named the recipient of a leadership award in Lafayette.

Growing up, Abbeville native Brandon Smith had the greatest of influences in his mother Sabrina. Smith; who now lives in Lafayette, grew up here in Vermilion Parish and credits his mother as someone who had always taught him to always be prepared; something she tended to make ease of, as if it were as simple as that. “She was and still is my greatest influence,” he said “Despite any hardship we faced as a family, I never felt like I’d made a mistake bad enough not to get through it.”
Smith, who graduated from Abbeville High in 2006, was elated to be out of school; as most students are. “At this point, I was contemplating what the rest of my life would hold.”
The birth of his son not long after he graduated, nudged him along his path; a path that he knows was always meant for him.
“My life became more about being a good role model,” he said “I began asking myself what kind of man I wanted to be. At the age of 25, Smith graduated from college with a Bachelor of Science in Information Technology, working in Training and Development.
“With parenthood having such a profound effect on me, knowing I wanted to help people discover the best within themselves, I started getting involved in community efforts,” he said. Those efforts included food and clothing drives, Toys for Tots, as well as other initiatives to give back.
Smith, along with two others, partnered with UL Lafayette and the Lafayette Parish School System to create a camp for middle and high school students in order to teach them the basics of computer building and programming. This camp is called the Annual STEM Camp.
All of these accomplishments thus far not only navigated a path for others, but for Smith as well. He went on to be the recipient of the 2017 ’20 Under 40 Acadiana Young Leadership Award’. Smith was ‘humbled’ and ‘grateful’ for such recognition.
In 2018, Smith graduated again, this time with an MBA, hoping to use these new skills to make a greater impact.
“Today, I work at Waitr as the Product Owner of Operations,” he said. At Waitr, Smith manages software development teams, and as busy as he is, he still finds time to do his part to help his community. The businessman is also ‘much honored’ to serve on the Board of Directors in two great organizations; Big Brothers Big Sisters of Acadiana and the Leadership Institute of Acadiana.
Big Brothers Big Sisters of Acadiana is a one-to-one mentoring program pairing great role models with kids who want to realize their full potential and the Leadership Institute of Acadiana is dedicated and committed to building leaders for the Acadiana Region.
“My son is now 13, and I am proud of the example that I continue to set for him,” Smith said. To those who are young and wondering where life will take them, Smith has a message, “Every one of you should just take a step each day without focusing too much on the destination,” he said “Enjoy the adventures along the way, find what you’re good at and what makes you happy.”
Brandon Smith plans to continue taking advantage of every opportunity to help someone. “I urge our young to do the same, once you do that, everything else falls into place.”