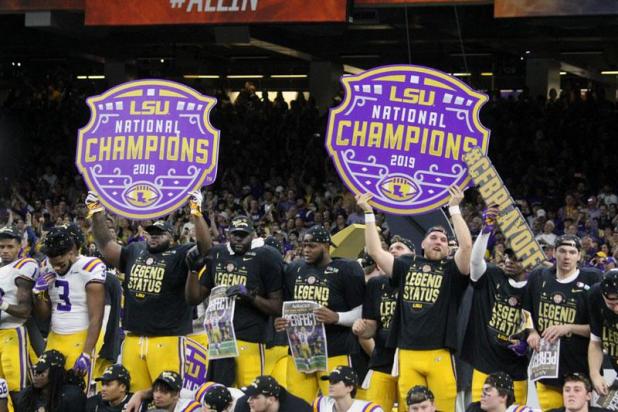 NEW ORLEANS - A dense fog enveloped the Crescent City Monday which brought about thoughts of things emerging from the poor visibility like the ghost of Marie LeVeau or Jean Lafitte.
What did emerge, however, was a College Football Playoff National Championship for the Fightin’ Tigers of LSU after dethroning the reigning national champion Clemson Tigers, 42-25.
“Well, I want to thank our great fans for being here,” said LSU head coach Ed Orgeron. “We left the hotel today, what a phenomenal group we had. They gave us energy all night, and they’ve been with us all year.
“Give the credit to our players. Those guys fought. We started working last year on January 17. They’ve worked their tails off with Tommy Moffitt. They did the right things, character, grit, determination.”
He continued, “We’ve got to give the credit to our coaching staff, Jack Marucci, Tommy Moffitt, all the trainers, and just a tremendous night for the LSU Tigers, tremendous night for the purple and gold, tremendous night for the state of Louisiana. We are so proud to represent them.”
Tiger linebacker Patrick Queen was Defensive Player of the Game.
“At the end of the first half,” he said, “Coach O sat us down, calmed us down. We were really anxious being out there, so we just all gathered together and played team defense.
“We always knew this was Joe (Burrow)’s team from the day he came in. He was competing in the sprints. So, for Joe to be that kind of person to come out on day one and give us the best he can, we already knew this was his team.”
Burrow broke another record in the game by throwing his 59th touchdown of the season on his way to being named Offensive Player of the Game.
“I think what we did tonight can’t be taken away from us,” he said. “I know this National Championship will be remembered for a long time in Louisiana. To do it in New Orleans is even more special. This is going to be remembered for a long time.”
For another LSU player, this victory was special not only for himself, but his native Mamou in Evangeline Parish.
“Shout out to Mamou,” said offensive lineman Austin Deculus. “This is for Mamou. After every game this season, I told my dad I wanted to represent Mamou and I wanted to represent something bigger than me. That’s why I changed my bio because I just wanted to represent them, and I hope I made them proud.”
LSU trailed 7-0 at the 6:34 mark of the first quarter after Clemson’s quarterback Trevor Lawrence rushed for a touchdown from a yard out.
Later in the quarter, Burrow completed a 7-yard pass to tight end Thaddeus Moss and, after back-to-back positive gains by running back Clyde Edwards-Helaire, he found wide receiver Ja’Marr Chase for a 52-yard pitch-and-catch in the end zone. With the point-after, the game was tied at 7 with 2:20 to go in the first quarter.
Clemson went on to add 10 points on the scoreboard.
With his team down 17-7, Burrow found Chase for a 16-yard completion that was followed by a 56-yard completion. Later in the drive, Burrow scrambled for 3 yards to score a touchdown. The point-after try was again good to make it a 17-14 game with 9:17 before the half.
LSU, later in the second quartet capped off a drive on a 1-yard touchdown catch from Burrow to Chase. The point after try made it 21-17 LSU lead.
On its next possession, Burrow completed a pass to Moss for 6 yards and a touchdown. The point after attempt increased LSU’s lead to 28-17 with just 10 ticks left on the second quarter clock.
Clemson made it a one possession game after a field goal try on its opening possession of the second half, but LSU answered on its ensuing possession.
That possession began with a Burrow run for 10 yards and ended with a Burrow touchdown completion to Moss from 4 yards out.
The LSU machine kept running offensively and defensively and brought about a rainfall of confetti after the game as the National Championship trophy was hoisted by the purple and gold.
Burrow finished the game completing 31 of his 49 attempts for 463 yards and five touchdowns.
Edwards-Helaire was the leading rusher with 115 yards on 16 carries. Leading the receiving corps was Chase with nine catches for 221 yards and two touchdowns.