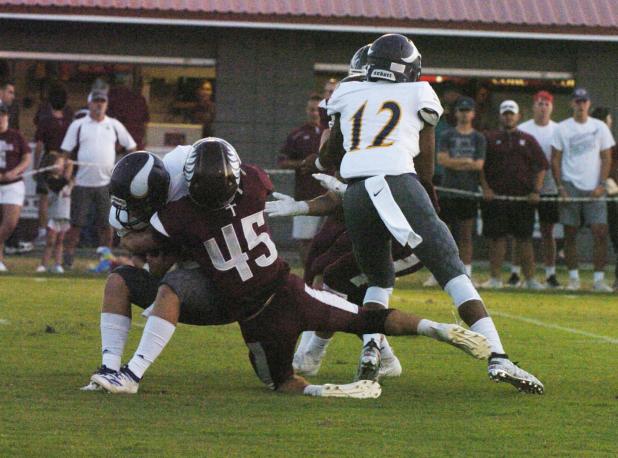 VC's Alex Sanders makes a tackle early in the game. 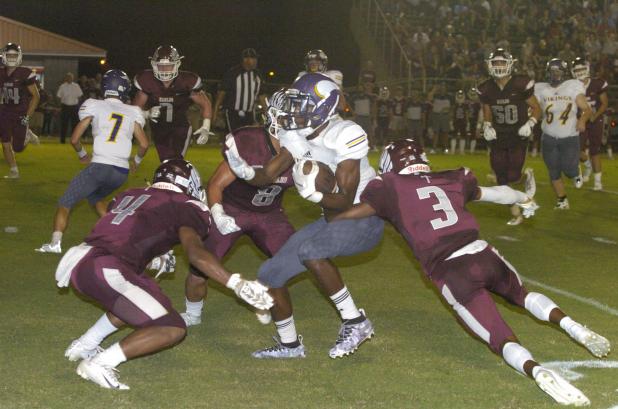 After getting a big win the week before against Catholic High of New Iberia, the Vermilion Catholic Eagles were handed a 33-21 loss to Opelousas Catholic on Friday.
Despite outgaining OC, 480 yards to 327 yards, Opelousas Catholic’s offense gave VC’s smaller defense fits.
Opelousas Catholic quarterback Jessie Roy had success throwing the football, completing 21-out-of-30 passes for 233 yards and three touchdowns.
VC quarterback Drew Lege did not have a bad night. He completed 32 out of 50 passes for 365 yards and two touchdowns.
The difference in the game was when OC needed to score, it did.
The Eagles tied it 21-21 in the first six minutes of the third period, but OC came storming back and scored the next 14 points to secure the win.
VC head coach Kevin Fouquier was not surprised by how well OC played.
“It is always a battle every time we play them,” said Fouquier. “They are a good football team. They have good athletes. Their quarterback ran their offense well. Their receivers were good athletes.”
The Eagles beat OC last year in Opelousas. However, Roy was sick and missed the game. On Friday, his two favorite targets were Keon Coleman and Ronal Patin. The two combined to catch 14 passes for 171 yards. Coleman had eight catches for 131 yards and scored twice.
The Eagles took their opening drive in the game and marched 80 yards in 10 plays. Lege threw an 8-yard touchdown pass to John Robert Allums seven minutes into the game.
The Eagles came out swinging in the first quarter and scored on its first drive, but the Vikings got back up off the ground and scored on their opening possession to tie it, 7-7.
The big play in the first half turned out to be a questionable call by the referees. VC’s defense was able to stop the Vikings and force a punt. On the punt, the Eagles got the ball but then had to give it right back to the Vikings. The Eagles were called for blocking in the back on the punt.
Opelousas Catholic got the ball back, and the penalty gave the Vikings a first down. Three plays later OC scored a touchdown and went ahead 14-7.
Down 21-7, the Eagles had a chance to cut the lead to seven by marching down to the OC 6-yard-line with 25 seconds to play in the first half. In four plays, they could not score.
In the second half, VC got back in the game in the third period by scoring 14 points. On a fourth-down, VC punter Andrew Marceaux faked the punt and threw a 19-yard pass to Andrew Derouen to keep the drive alive.
A few plays later, Andre LeBlanc had a 35-yard run. Jacques Touchet scored from the 5-yard line, and VC was back in the game.
VC’s defense came through in a big way by forcing a fumble on OC’s next possession. Camden Sellers sacked the quarterback, and the football came loose. Alex Sanders fell on the ball, and VC took up shop at the OC 30-yard line.
Three plays later, Lege threw a pass to Sellers for a 13-yard touchdown. Allums nailed the extra point, and the game was tied 21-21.
VC linebacker Jacques Touchet led the defense with 14 total tackles.