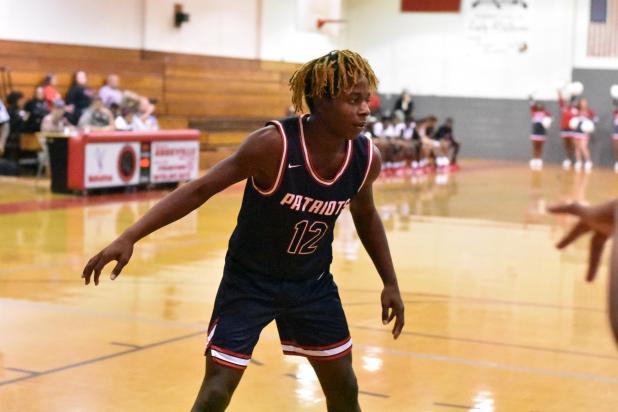 Rontrel Broussard scored six points for North Vermilion in the win over Erath.

ERATH - -The North Vermilion Patriots beat Erath 59-40 on the road Tuesday night.
North Vermilion jumped out to a 22-8 first-quarter lead and never looked back.
In the first quarter, Parker McNees had the hot hand for NV. He nailed three 3-pointers and two 2-pointers for a total of 13 points. He finished the game with 13 points.
At half time, the Patriots had a convincing 36-12 lead.
Erath was able to score 27 points in the second half but never got too close to taking the lead.
The Patriots made 10 3-pointers.
Darrius Gilliam had three treys and finished the game with nine points.
Issac Touchet made two treys and finished the game with six points for NV.
For Erath, Ian Harrington had 8 points, while Tucker Derise and Brayden Broussard each made 10. Cole Domingue added four points for EHS.

The Lady Wildcats of Abbeville scored only 12 points in the first half and still managed to beat Northside, 41-27.
At halftime, Abbeville was down 16-12.
In the third period, the Lady Wildcats came out smoking and scored 19 points.
Lekira Moore, who scored one point in the first half, poured in nine points in the second half.
Ja’learreia Soelv led AHS with 13 points. In the first half, she only scored three points. However, she scored 10 in the second half.
Allissa Richard and Chelsea Steweart had six points each for AHS.

The North Vermilion Lady Patriots were too much for Erath, winning 50-13.
The top scorer for Erath was Madeline Hebert, who had six points.
Erath scored five points in the first period and zero in the second period for a total of five points in the first half.
North Vermilion had 10 players score.
Jace Myers led NV with 12 points, and Kennedy Semian added 10.
Jade Lewis chipped in with seven points for NV.

Despite 20 points from Kyrah Brailey, the Lady Eagles from VC lost to Barbe 51-46.
She made three 3-pointers and was six out of seven from the free-throw line for VC.
Emily Bertrand finished with 11 points. Other VC scorers were Ava Hebert (7), Whitney Bourque (2) and Kelli Frith (6).

The Lake Arthur Lady Tigers led 34-17 at half time and never looked back against the Kaplan Lady Pirates, who were on the road.
Alyia Broussard paced Kaplan with 13 points. In the first half, she scored nine of Kaplan’s 17 points.
The big quarter for Lake Arthur was in the second quarter, outscoring Kaplan 25-8.