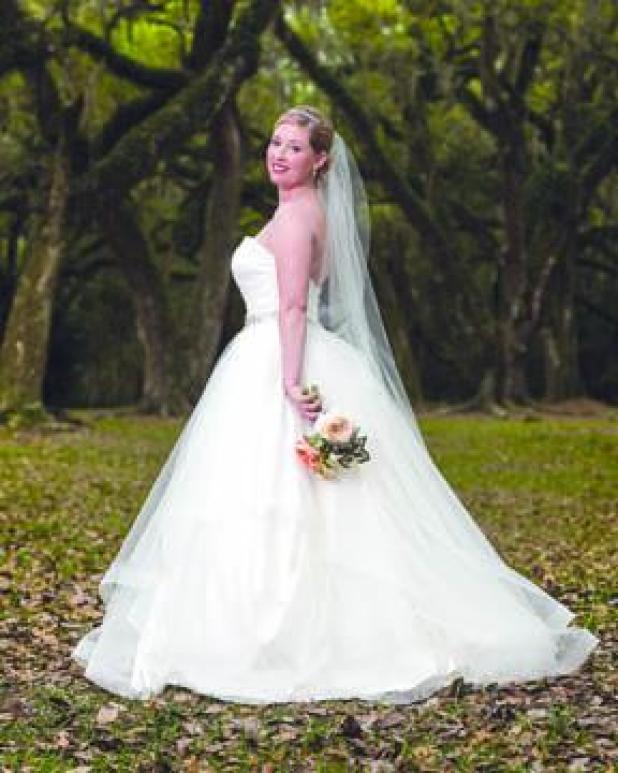 Miss Jillian June Roland and the Hon. Frank Stanton Hardee III were married Saturday March 18, 2017, at Kaplan Baptist Church at 5 o’clock in the evening in Kaplan, Louisiana. The officiants were Reverands Lee Rodgers and Larry Maxwell Sr.
The bride is the daughter of the William D. Roland III and Erin B. Roland of Hineston, La. Her paternal grandparents are the late William D. Roland Jr. and June W. Roland of Alexandria, La and her maternal grandparents are Howard and Mary Scannel of Twentynine Palms, California.
The bridegroom is the son of Frank Stanton Hardee Jr. and Linda Hardee of Kaplan. His grandparents are the late Mr. and Mrs. Frank Stanton Hardee Sr. also of Kaplan and the late Mr. and Mrs. Homer Jackson Amacker of Bogalusa, Louisiana.
The music for the ceremony was provided by Colin Smith, pianist and Lindsay Leblanc, vocalist. The bride entered to Plaisir D’amour sang by Ms. Leblanc.
The bride was accompanied by her friend, Catherine Caldas of New Orleans, as maid of honor. She wore a knee length, pale pink satin dress with a high collar and a bow detail in back.
The groom was accompanied by his friend and West Point classmate, Paul Ferrigno of New Providence, New Jersey as best man. They wore matching black tuxedos and matching cufflinks that were gifted by the groom.
Ushers were Rusty Brogan, William Roland, IV, Barrett Hardee, and David Hardee, brothers of the bride and groom.
The bride was escorted down the aisle by her brothers Rusty Brogan and William David Roland, IV.
She was elegant in her ivory ballgown with a crisscross ruching bust, Diamante embellishments at the waist and a layered full tulle skirt with a matching tulle fingertip veil. She carried a bouquet of light pink dahlias, pink o’haro garden roses, white o’haro garden roses, beautiful soft pink cabbage roses accented with pink hyperium, and a touch of seeded eucalyptus provided by Marlene’s Flower Center of Kaplan. The bouquet was adorned with a satin ribbon held with heirloom brooches borrowed from the mother of the bride and the mother of the groom.
Following the ceremony, the guests were entertained at the home owned by Frank Stanton Hardee Jr. and his sister Pauline “Polly” Hardee, Ph.D. on North Irving Avenue in Kaplan.
Champagne and hors d’oeuvres of beef tenderloin and catfish were served upon the guest’s arrival. The table presentation included chicken florentine with pasta, shrimp cocktail, crawfish enchiladas, summer salad, spinach and bacon canapes, caprese skewers, brie en croute with praline topping, and fresh fruit skewers. The catering was provided by Stacy Landry Catering of Lafayette.
The couple’s first dance was to Ella Fitzgerald’s rendition of Always. The bride danced with her brothers to Queen’s, Your My Best Friend and the groom danced with his mother to The Beatles’, In My Life. The music for the evening’s event was provided by D.J. Phil Lormand of Kaplan.
The wedding cake was two tiered with scalloped ivory frosting, a cream cheese filling and adorned with flowers matching the bridal bouquet. On the side were three additional matching eight inch cakes with lemon, strawberry, and pineapple filling. The groom’s cake was a luscious german chocolate. Mrs. Debbie Meyers of Kaplan was the baker the bride and groom chose.
Guests held sparklers to honor the couple as they departed in a black limousine.
On Friday, March 17, 2017, a rehearsal dinner was held at the Old Riverfront location in Abbeville hosted by the groom’s parents.
The bride holds a Bachelors of Science from McNeese State University. She is employed in pharmaceutical sales for Quintiles Corporation.
The groom holds a bachelor’s degree in French from the United States Military Academy at West Point, New York and a law degree from Southern University Law Center. He is the Kaplan City Judge and owner of Hardee Law Firm & Mediation Center.
The newlyweds will reside in Kaplan, LA after their honeymoon in Europe.
Wedding and engagement photography provided by LillyB Photography of Pineville, La. Bridal portrait provided by T.J. Shuflin Photography of Alexandria, La.