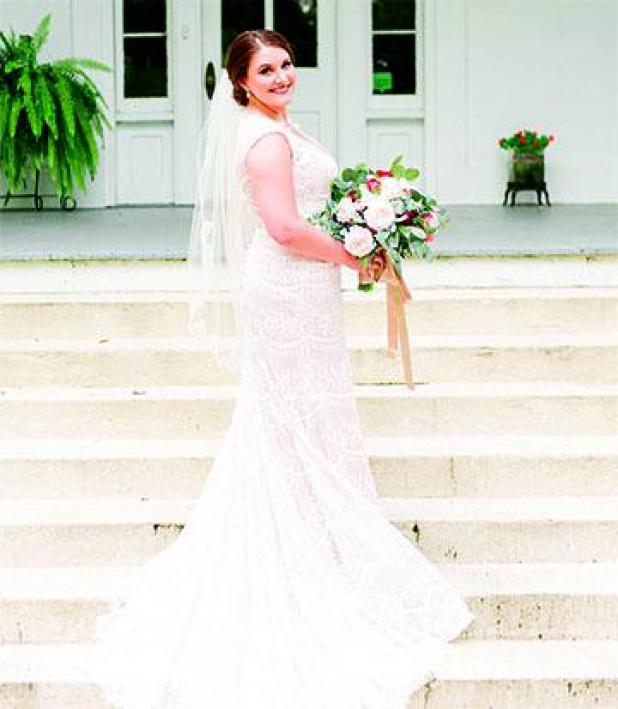 Miss Emily Soirez and Mr. Coy Frederick, both of Erath, were joined in holy matrimony during a nuptial Mass at Our Lady of Lourdes Catholic Church in Erath on Saturday, December, 15, 2018.
The 6:30 p.m. ceremony was officiated by Father Andre Metrejean.
The bride is the daughter of Jimmy and Charlene Soirez of Erath. Her grandparents are Alice Domingue and the late Eugene Domingue of Erath and Gloria Soirez Broussard and the late Daniel Soirez of Erath.
The groom is the son of Jackie Cornez-DeRouen of Youngsville and Eric Frederick Sr. of Abbeville. His grandparents are Georgette and Virgil Vice of Abbeville.
The pews in the church were marked with fresh silver dollar eucalyptus wrapped in red satin ribbon.
Music was performed by Manique LeBlanc, organist.
The bride found her wedding gown exclusively at A-Net’s Bridal Boutique. Escorted by her father. The sleeveless, sheath dress began with a V-neck of intricate eyelash lace and followed down into an illusion plunge. The completely lace back closed with soft, ivory pearl buttons that cascaded throughout the semi-cathedral length train. The bride’s veil was an ivory waltz length piece trimmed with intricate eyelash lace. She carried a fresh bouquet of ivory English garden roses wrapped in champagne satin ribbon completed with an ivory rosary and memorial pendants.
Rachael deGraauw, sister of the bride, served as matron of honor. Bridesmaids included Morghan Soirez, cousin of the bride; Breanna Bokar, friend of the bride; Shelby Domingue, sister-in-law of the groom and Kaitly Gary, sister of the groom. The attendants wore a modern approach to the classic satin ball gown in apple red. They carried bouquets of ivory hydrangeas with lambs ear and eucalyptus. The flower girl was Lea Broussard, cousin of the bride and daughter of Tami and Gordon Broussard of Abbeville. She wore an ivory floor length dress with eyelash lace to match the bride. The dress was completed with a champagne sash.
Eric Frederick, brother of the groom, served as best man. Groomsmen included Anthony Hardy, cousin of the groom; Aaron Darby, friend of the groom; Michael Seymour, friend of the groom and Javion Johnson, godchild of the groom. . Serving as ring bearers were Bryce Broussard, son of Tami and Gordon Broussard and godchild of the groom and Joseph deGraauw, son of Rachael and Frankie deGraauw, godchild of the bride. Ushers included Frankie deGraauw, brother-in-law of the bride and Jadon Soirez, cousin of the bride.
A reception was held at La Louisiane Banquet Hall which was decorated with gold mercury glass votives, ivory candles, red roses and ivory table cloths.
The three tiered bride’s cake was multi-flavored with ivory butter cream frosting with gold accents and fresh flowers.
The two tiered groom’s cake was a white hunting and fishing themed cake with strawberries and cream.
Upon their return from a wedding trip to Negril, Jamaica, the couple will reside in Erath.
A rehearsal supper, hosted by the groom’s mother, was held on Thursday, December 13, 2018 at Bonne Soiree.
The bride is a 2011 graduate of Erath High School and a 2015 UL Lafayette graduate with a Bachelor’s of Science degree in Secondary Social Studies Education. She is employed with the Iberia Parish School Board at Delcambre High School.
The groom is a 2011 graduate of Erath High School and a 2016 graduate of UL Lafayette with a Bachelor of Science degree in Industrial Technology. He is employed with Baker Hughes.