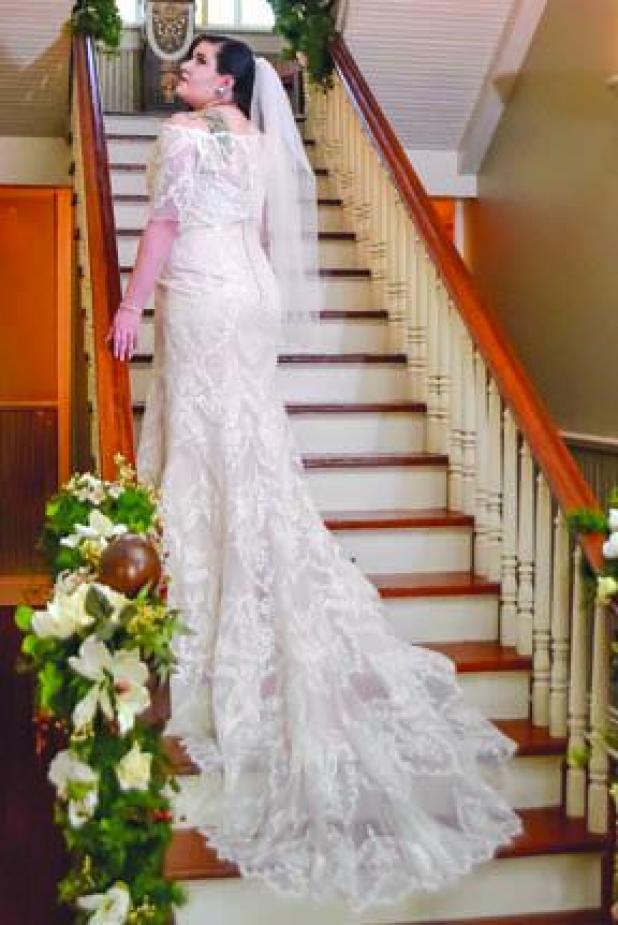 Miss Jacquelyn Elizabeth Bienvenu of Abbeville and Mr. Thomas Hugh Adkins of Lafayette were joined in marriage on Saturday, March 11, 2017, at the First Presbyterian Church in Abbeville.
Pastor Mickey Byrd officiated the 6 p.m. evening nuptials.
The bride is the daughter of Tracy Joseph Sonnier, USN (Ret), and his wife, the former Jeri Harrington of Abbeville. Her grandparents are the late Gerald C. Harrington and the late Bertha Zaunbrecher of Abbeville. Her her step-grandmother is Joycelyn C. Harrington, also of Abbeville. Her paternal grandparents are Mr. and Mrs. Bobby Nix of Harahan, La.
The groom is the son of Tony Adkins and Ms. Gwen Adkins of Lafayette. His maternal grandparents are Mary Vincent and the late Wade Vincent of New Iberia. His paternal grandparents are Collins Harrington and the late Juanita Harrington of New Iberia.
The lovely sanctuary where Jacquelyn and Thomas shared wedding vows was adorned with a large urn featuring ivory hydrangeas and flowering quince. Majestic columns crowned with lush Boston ferns stood on either side of the large arrangement. Another urn similar to the sanctuary flowers sat on ivory organza atop the beautiful church piano. Ivory hydrangeas framed in yards of sage tulle marked the pews.
Music was provided by Kurt Boudreaux, organist and Thomas Benoit. Selections performed were Jesu Joy of Man’s Desiring composed by Bach was played while the mothers and grandmothers were seated. Air II composed by Handel accompanied the bridesmaids’ procession. Canon in D composed by Pachelbel announced the entrance of the bride and her step-father. While Jacquelyn and Thomas became husband and wife, O Good Beyond All Praising by Holst was heard. During the presentations of roses to their mothers, the musicians played O Mio Babbino Caro composed by Puccini and as the ceremony concluded, Rondeau by Mouret escorted the wedding party and guests out of the church.
Dressed in full dress uniform, her step-father gave her hand in marriage to Thomas.
The bride wore a beautiful Maggie Sottero vintage sheath of ivory cotton lace featuring a sweetheart neckline and a detachable portrait collar jacket. The gown was adorned with silk buttons down the back and a cathedral-length train.
For her headpiece, the bride chose an ivory fingertip veil attached to a clip made from her great-grandmother’s pearls. She carried a hand-tied bouquet of blush and ivory roses, hydrangeas and deep purple stock. Tucked inside her bouquet was her great-grandother’s handkerchief and rosary.
Sarah “Sully” Hotard of Lafayette attended as matron of honor. Bridesmaids included Katie Caldwell of New Braunfels, Texas; Corey Stangof Abbeville and Brock LeBlanc of Lafayette. Hannah Marie Courville, niece of the groom, served as flower girl. She wore a beautiful ivory dress and carried a basket filled with rose petals and decorated with sage tulle and ivory hydrangea.
The attendants wore beautiful floor length gowns made from champagne silk. Each bridesmaids had their dress tied in a unique fashion to add a touch of individuality. Brock LeBlanc wore charcoal grey pants with a champagne shirt, tie and vest. The bridesmaids bouquets were simply and elegantly a single purple gladiola while Brock and the groomsmen sported purple gladiola boutonnieres.
Christopher Ballou of Lafayette served as best man. Groomsmen included Justin Gary of Lake Charles, Cody Turner of Lafayette and Joshua Doucet of Lafayette. The ring bearer was Manning William James, cousin of the bride.
A reception was held at the Caldwell House in Abbeville. Flora arrangements featured the bride’s favorite colors, blush pink, ivory, sage and deep purple. Arrangements filled with roses, stock, delphinium, gladioli, alstroemeria, hypericum, genista, curly willow and freesia filled the historic home with beauty and fragrance. The courtyard was covered in lanterns and mounds of rose petals, setting the perfect romantic mood.
The bride’s cake was an ivory three tiered cake featuring an ivory peacock and tail feathers cascading down the cake. A gold “A” encrusted with Swarovski crystals topped the cake in front of the peacock.
The groom’s cake was Star Wars’ R2D2 sporting a black tuxedo.
The couple will honeymoon at the X-Caret Resort in Cancun, Mexico.
A rehearsal dinner was held on Friday, March 10, 2017, at the home of Mayor and Mrs. Mark Piazza hosted by Tony Adkins and Ms. Gwen Adkins.
The bride is a 2013 graduate of Abbeville High School and attended the Paul Mitchell Institute in San Antonio, Texas. She is employed at The Color Bar in Lafayette.
The groom is a 2007 graduate of Barb High School in Lake Charles. He is employed at A-1 Repair and Supply in Broussard.