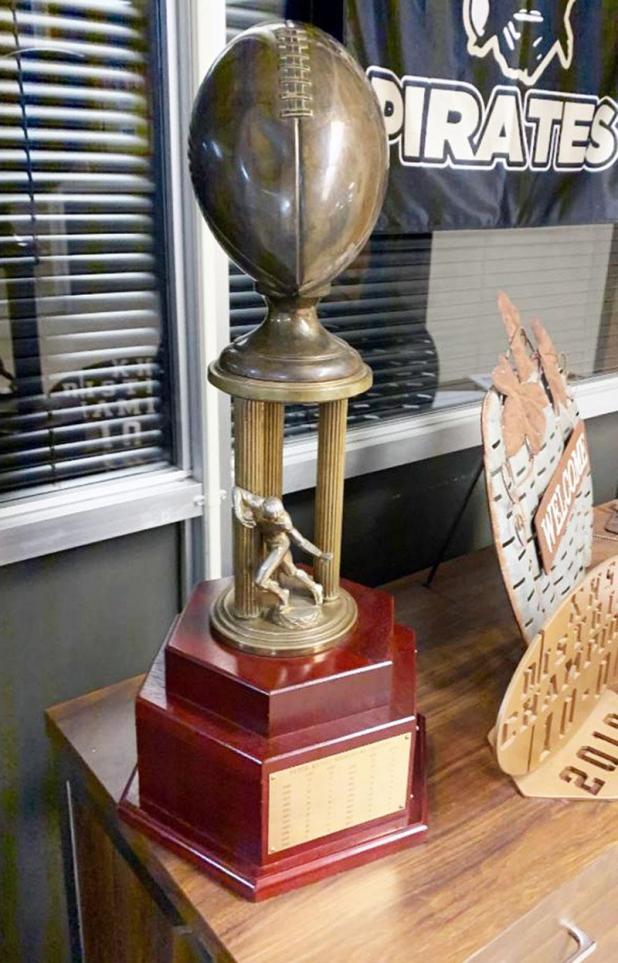 One does not have to look too far when it comes to reasons why the Kaplan Pirates need to get pumped up to the play the Abbeville High Wildcats in Kaplan.
On Friday, the Wildcats (1-7) travel to Kaplan to battle the Pirates (4-4), who are on a three-game winning streak.
On paper, it does not look like there is much for the two teams to play for. Look harder, however.
For starters, there is the Peter Russo Memorial Trophy, which is given to the winner of the Kaplan/Abbeville game. The Pirates have owned the trophy for the last 13 years. Abbeville’s season will be made if it brings the trophy back to AHS.
The Pirates are also playing for a piece of the District 8-3A District title. In an age where everyone is playing for power standings, the Pirates take pride in winning a district title or a share of the district title.
Kaplan has won four straight district titles and has a chance to win at least a piece of the title with a win on Friday. This is Kaplan’s final district game and win would put them at 4-1 and give them no worse than a tie for first in district. Abbeville would love to spoil that, also.
With two games remaining, the Pirates also have a chance to play host in the first round of the Class 3A playoffs in three weeks. They are at No. 18 and the top 16 play home in the first round.
To make that happen, they will need to finish the regular season with a win over Abbeville and then a win against Lake Arthur in hopes of moving up in the power standings.
“These are good reasons for our team to be motivated,” said KHS head Stephen Lotief, who has yet to lose to Abbeville in eight tries. “I just hope we are motivated on Friday.”
Kaplan free safety Nathan Sistrunk said the Pirates are clicking at the right time. After losing three straight, including a stunning loss to Erath three weeks ago, the Pirates woke up. Since, the EHS loss, they have beaten St. Martinville and Crowley. He said the EHS loss turned the Kaplan season around.
Despite being on a two-game winning streak, the Pirates are not looking past Abbeville.
“We are not overlooking Abbeville,” said Sistrunk. “This is a big rivalry game. We are playing for the Russo Trophy. They want it back. When I see Abbeville, I see a team that has a lot of athletes. They have speed. I feel we should go into that game, thinking they are a team like Notre Dame.”
Both teams enjoy running the football.
The Pirates, running out of the Wing-T offense, use a two -headed monster
Drake LeJeune and Nathan Sistrunk get most of the touches. LeJeune has 74 carries for 591 yards, and he scored four touchdowns. Sistrunk has 110 carries for 469 yards and nine touchdowns.
Getting a lot of touches lately is Ethan Weygand. In the last two games, he has rushed for 104 yards and scored two touchdowns for Kaplan.
Like Abbeville, the Pirates use two quarterbacks. Roman Bradley will start and will also platoon with Mason Frick. Bradley (6 of 18, 35 yards passing) and Frick (14 of 35, 152 yards passing) can each throw the ball.
As for as the Abbeville Wildcats, they would love to put a notch in their belt with a win over Kaplan. They would love to be known as the team that ended Kaplan’s 14-game winning streak over Abbeville.
But in order to make that happen, they are going to have to cut down on their turnovers. Against Crowley, three AHS turnovers, which led to 18 Crowley points.
The Wildcats use a two-quarterback system. Jaiyden O’Brien will start and Brendan Shelvin will also see action.
Both QBs love to run.
O’Brien has carried it 62 times for 208 yards. He has also completed 19 out of 54 passes for 260 yards. Shelvin has completed 16 out of 35 passes for 168 yards.
Derrian Harrison is Abbeville’s leading carrier with 463 yards on 83 carries.

In 1961, the Joseph D. Russo family inaugurated the Peter Russo Memorial Trophy in honor of their son, brother and uncle, Peter Salvatore Russo.
Peter graduated from Abbeville High in 1941. He excelled in all sports, but was best known for being an All-State boxer. He joined the Marines shortly after graduation. On July 23, 1944, he gave his life for his country, never returning home. He was 21.
The Russo family chose to have the trophy presented to the winner of the annual football game between the Kaplan Pirates and the Abbeville Wildcats as a tribute to Peter, a high-school athlete who was admired for sportsmanship and a fierce competitive spirit.
The last time a Kaplan team lost to Abbeville was in 2005, when Keith Calvert was Abbeville’s head coach.